Free Delivery
on all UK orders

Home / Blog / First Photo Shoot For Our Collars and Leads!

First Photo Shoot For Our Collars and Leads!

The weather in Somerset and the majority of Britain has been pretty poor this week. Now I don’t mind the cold but this rain has been somewhat disconcerting! We had planned a beautiful photo shoot in a lovely Dorset country house hotel then yesterday morning the heavens opened!

To cut what could be a long and dull story short we decided to shoot in the studio instead, and the results were tremendous. Our doggie models for the day Harley and Daisy were absolutely amazing and took to their roles instantly. Thank you so much Sara for lending us your dogs and helping them pose so well on the day!

Oscar & Hooch also had a ball for the first hour of shooting (we got one shot from this!), more content with saying hello to John our photographer! However we got one good shot of the boys with their owner Paul looking somewhat tired (probably why he sat down in the end!).

Of course we’re on tenterhooks with the imminent launch of our designer dog collars and leads. We start taking pre-orders from next Friday aiming to deliver shortly afterwards. We will also be stocked in different retail outlets across the country so look out for our signature collars and leads…

Wednesday saw the final of Top Dog Model so congratulations to Simba and Dan for a well-deserved victory! Real shame for Lucky and Scarlett who did so well!!

Paul managed to get a shot with Simba and Dan shortly after their victory: 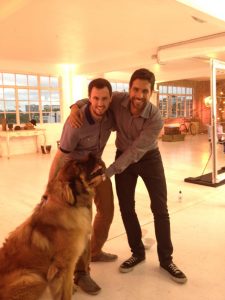 Oscar & Hooch will certainly be keeping an eye on the finalists over the coming year!

When measuring your dog’s neck, include the space for 2 fingers to slide under comfortably in your measurement. Our size guide works on the available holes on the collars, so we would encourage you to aim for a collar size that uses one of the middle holes. The breeds suggested against each size are based on averages. Please measure your dog for accurate sizing – every dog is different! For more information, check out our blog to help you choose the perfect size.

How to measure for our martingale collars:
Use a soft tape to measure the widest part of your dog’s head and neck, keeping it fairly snug. Using the biggest measurement, add 5cm or 2 inches. Now use this new figure when referring to the size chart for the size needed. If you are on the cusp of the 2 sizes we would suggest you size down.

Measure the length from the head to your dogs tail.

Our dog and puppy harness size chart will provide you with a simple guide to follow, so you can find the best fit for your pooch. Here at Oscar & Hooch, we offer a selection of luxury harnesses that are available in a range of sizes to suit all breeds. Our harnesses are machine washable and lovingly handmade in the UK.